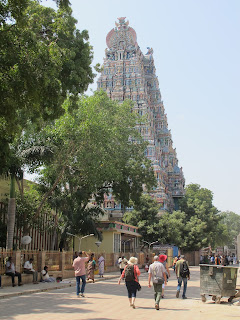 We set off for Madurai, driving through many paddi fields.  In due course we reached the magical city of Madurai, which is dominated by its magnificent temple complex.  Babu dropped as off somewhere in the city centre and we followed Nats through many side streets until we reached our lunch spot, The Sree Mohan Bhojanalay Restaurant, which is a simple upstairs workingmens eatery.  Humble as it was, we had a very tasty Marvari – South Indian fusion lunch with generous portions.


We then walked back to rendezvous with Babu, taking in all the colourful sights.  We checked in to the Heritage Hotel which is set in extensive picturesque grounds and possesses a unique swimming pool shaped like a step-well, reminiscent of the pool we were about to see in the temple complex. 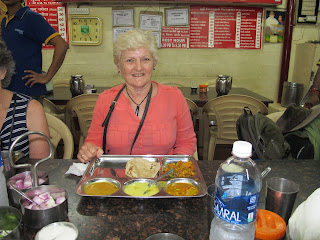 Late in the afternoon we were accompanied by our guide, a Mr Johnson, to see first of all the Nayakkar Mahal (Palace).  This building houses many fine treasures, especially some exquisite old sculptures of various deities.  Sadly, the building and its grounds are neglected with paint peeling off and lots of pigeon damage and rank grass.  Many labels had come off the statues.


But the real gem of Madurai is its famous Meenakshi Temple, the best Hindu temple that I’ve seen in India.  We passed through tight security into the complex and were amazed at the beauty of the art work inside.  There was a maze of arcades lined with well-preserved statues of deities and gargoyles.  It is truly impressive.  There was a lovely Nandi with people whispering their secrets into his ear.  Local people were prostrating themselves in front of shrines and we could view some beautiful images of Shiva.  This complex is huge and one could get lost inside, although not entirely.  There is a formal layout. 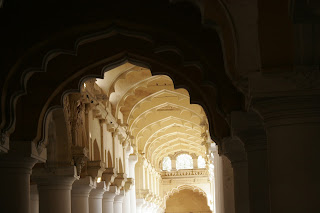 Outside but still in the temple grounds, we gasped at the enormity and beauty of the gopurams and other structures – high and ornately carved buildings with little images telling a story.  Very colourful.  We sat by a central pool and admired the setting, both the temple complex and its devoted followers.


Leaving the complex we wound our way through a fascinating warren of narrow alleyways, with hosts of tailors on Singer sewing machines and a myriad of little dhukhas selling beautiful cloth and jewellery.  It reminded me of Change Alley in Singapore fifty years ago.


Nats then took us for an Italian meal at Phil’s Bistro – quite different.
Posted by Nats Subramanian, Take Me 2 The World at 15:42