Started early for our drive to Kadiapatti, a village halfway between Thanjavur and Madurai.


En route we stopped to see a variety of things: a roadside family who roasted cashew nuts.  Took some interesting photos.  The raw nuts are first heated at high temperature in a pot over a fire.  The pot had holes which allowed the cashew oil to drip through to sustain the fire.

After a period of time the roasted nuts are taken out and whilst still very hot, an older woman would take a nut in her hand and hammer the nut casing until the actual edible cashew nut was revealed.  Nats bought some nuts off them and we took photos of the family with young children.


Further along we stopped to feed a troop of monkeys by throwing biscuits out the window.


We also stopped at a wayside village to purchase some pens at a small shop (“duka” in East Africa; “dhukhan” in Hindi; “kadai” in Tamil) to give as gifts for children.


At another point we stopped and walked down a dirt road lined on either side by terracotta horses, which were offerings to the gods, but we didn’t continue on to the temple. 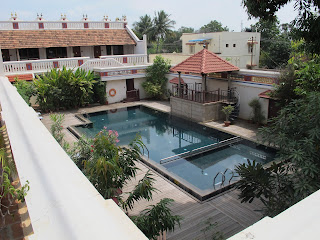 Eventually we arrived in Kadiapatti and booked in to the Chidambara Villas.  This is a magnificently restored Chittinad House and after a superb authentic South India lunch, served on banana leaves, we were taken on a tour of the house by the delightful manager called Kavitha.  She spoke excellent English and was very informative.  The house is amazing in its architecture with rooms in the past allocated for various purposes, such as discussions between parents for the offering of a dowry, or arranging for loans, another one for formal hosting and other rooms for storing valuables.


For the next couple of hours we rested to let our sumptuous lunch go down. 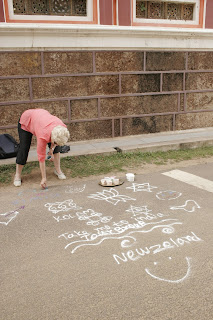 Around 4pm we gathered to watch Kavitha construct a Kolam on the road outside our entrance.  We joined in to chalk our own images, then we went for a stroll around the village.  The Chidambara Villas are an oasis of splendour amidst a neglected village (patti) where several grand old houses have passed their glory and fallen into neglect as the younger generation leave for richer pastures.


When we got back, Alison and I had a swim in the inviting pool.


Just prior to dinner, Nats had arranged for us to visit the kitchen and watch food preparation.  Dinner was a buffet of superb local dishes.
Posted by Nats Subramanian, Take Me 2 The World at 08:50