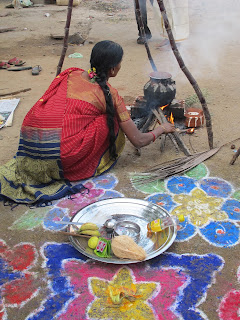 The day started early to take advantage of watching the Pongal celebrations.  A highlight was stopping at a small temple that was buzzing with activity.  People were praying, touching deities and placing powder on their heads.  There were some immense statues of deities on horses.  Everyone was friendly and welcoming.


Not long after leaving this temple we stumbled upon some roadside celebration so we stopped and watched young people dancing frantically accompanied by loud drums and crashing cymbal-like instruments.  Lots of locals were mingling around, as were tourists like us who happened to pass by, some of whom joined in with the dancing.  Nats informed me that the dance was Tamil Folk Art called “Thappaattam”.  All told, we obtained a satisfying glimpse of the Pongal Festival, even though some celebrations were cancelled as a result of the Government banning the Taming of the Bull (Jallikattu) ceremonies.

We then headed south along a motorway through dry barren country with low-growing arid shrubs and little sign of human habitation, apart from occasional fields of sunflower and corn.


After passing through Kovilpatti and glimpsing at the National Engineering College where Nats attended, we continued on and the vegetation progressively changed to one with many coconut and banana plantations.  To our right appeared the Western Ghats and we drove for several kilometres through a veritable forest of wind turbines. 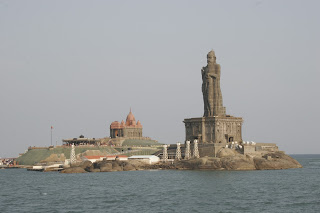 Eventually we reached Kanyakumari and had a delightful lunch at the Seaview Hotel.  I had a Malabar fish curry which gave me wonderful taste sensations.  In retrospect it was the best curry I tasted on the trip.


After lunch we checked into the Sparsa Hotel where our rooms had wonderful expansive views over the Indian Ocean.  Here we were at the very southern tip if the Indian mainland.


Late in the afternoon we stopped outside our hotel immediately into a very crowded market, along which we strolled to view the big statue of Thiruvalluvar, whose memorial we saw in Chennai on our first day.  Next to him was a monument to a wandering monk, Swami Vivekananda.  We looked at a Ghandi memorial and wound our way up a circular tower to observe the surrounding sea and town. 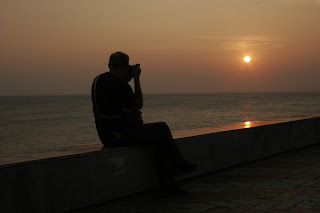 
Free-camping was allowed all along the street outside our hotel, so hundreds of campervans, mostly local visitors, had their vehicles lined up along the road.  With a concentration of humanity in a small area and no facilities provided, the sights and smells were rather unsavoury to say the least.  This town has much potential but presently lets itself down.  Not recommended.
Posted by Nats Subramanian, Take Me 2 The World at 11:02