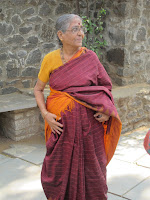 Busy day today.  Nats and Anitha collected us at 7.45am and we drove through early morning traffic to collect our older guide for the day, a delightful 77-year-old woman who proved to be very knowledgeable about Indian religion and art – Mrs Anandhi (Mrs “Happiness”).


We went first to the Kalakshetra Foundation which is an indigenous arts foundation set in a beautiful compound with lots of trees and scattered open-windowed rooms and a big auditorium.  No-one else was around and we arrived to an open area under a massive banyan tree where about 100 mainly young female students were seated on the ground in the lotus position, singing a long very appealing chant.  It was captivating. 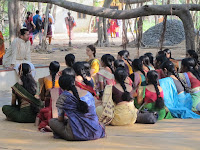 Around 9.30am they finished and dispersed to their various classes.  It was an absolute delight to wander around the compound watching or listening to the students performing dance and music.  Some were also learning to play various musical instruments such as the violin and the veena which is like a large-sized sitar, although the veena is more ancient than the sitar and there is no connection between the two.  Some of the dancing was thrilling to watch through the open windows or sitting on chairs inside. 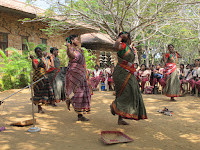 After this wonderful experience we went to the DhakshinaChitra Centre, which is a huge compound where houses from various South India regions have been reconstructed in their original form – from Tamil Nadu, Kerala and Andhra Pradesh – some from reassembled original materials collected from their home state.  Very interesting.  We watched an open-air dance performance, glass-blowing (Nats bought and gave us each a little peacock or elephant cocktail stirrer) and pottery-making.  There was an open gathering of artists from various villages who were selling their wares. We had an enjoyable South Indian lunch at this Centre.


In the afternoon we drove along the Marina Beach which is about 1km wide.  Locals were mingling on the beach but none were swimming.  We drove past an Ice House and Madras University and passed by old British heritage buildings. We then arrived at Santhome Church where St Thomas is buried.  We went in and observed his tomb.

We then visited a Shiva Temple at Mylapore, which you enter through an impressive gopuram adorned with colourful ceramic figures of Shiva.  A loud festival was in progress with crowds of people.  The chiming of a huge bell and the noise from the blowing of various instruments that sounded like South African vuvuzelas – a very penetrating a sound – was too much for Paul and me, so we retreated.  I was approached by an odd local who tried to convince me to take off my temple socks and experience the sensation of walking around the temple barefoot.  As part of a ritual, Nats prostrated himself in front of a shrine.  Anitha sat on the ground in the lotus position and swayed.  There was much ritual activity being performed all around us.

Tired at the end of a long day, we went back to our hotel, showered and relaxed in a quiet bar for a Kingfisher beer and then settled for a meal in the hotel restaurant – Barbara had a nasi goreng, Alison a plate of samosas and Paul and I shared a very hot green chicken curry.
Posted by Nats Subramanian, Take Me 2 The World at 19:00