In January 2016, Nats accompanied two lovely couples from New Zealand - Al & Alison Rowland & Paul & Barbara Brookfield for 21 days through South India. Al had been keeping a diary of the entire trip. He has gracefully given us permission to publish it. We would be presenting the day by day musing of Al for the next 21 days. Here is the first day! 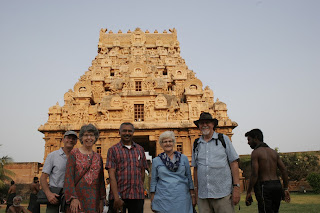 We arrived in Chennai late on the 6th after two tiring flights – AKLD-SING-CHENNAI.


We already had our electronic visas so immigration clearance wasn’t too bad, although Barb and Alison were both finger-printed and for some reason the machine wouldn’t record Alison’s fingerprints which caused a little consternation.


Our bags came through on the carousel, thankfully, as we had only an hour in transit in Singapore.


Nats was outside the airport to meet us – a welcome sight.  He took us to our air-conditioned van and we met our driver for the trip – Babu.


Through late-night traffic we drove to our hotel – the Raintree on Anna Salai, and after a nice shower we collapsed into bed.
Posted by Nats Subramanian, Take Me 2 The World at 14:19