Nats collected us at 9am and we went straight to the Valluvar Kottam, which is a memorial to a great poet Thiruvalluvar, who wrote a great tome called the Kural.  This is a long poem of 1330 couplets covering ethereal issues.  Sadly, the compound has been neglected and the massive chariot, which would look spectacular if in pristine condition, looks dilapidated.

An accompanying building houses granite-inscribed slabs with the couplets, and these are also in a neglected state.  The Kural dates back to over 2,000 years.  The gardens, which apparently were very pleasant, are now overgrown and occupied by the homeless.

We then strolled through the Koyambedu flower market which consisted of a riot of colour with mountains of different flowers.

At lunchtime we had a magnificent feast in the home of Dr Sudarsanan which his wife prepared for us.  We were treated like royalty in their home.  We gave them a wooden entwined table mat and B and P gave them a lovely plate. 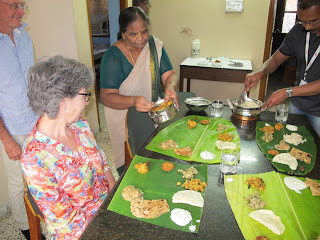 Late in the afternoon we visited St Andrew’s round church and then took a stroll down Mint Street, mingling with the throngs.

Nats had a team member with us all day called Anitha, who is very pretty and a delight to talk with.  She is 40 but looks 20 and she talked freely about her arranged marriage and the difficulties of forging her own life. 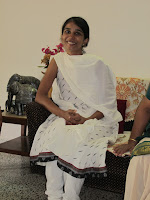 Late afternoon Barbara and Alison shopped for Indian toys whilst Paul and I went to Raymond’s tailors where I was measure for some trousers which I collect tomorrow.


In the evening we relaxed in the hotel with a Kingfisher beer and nibbles during the happy hour.
Posted by Nats Subramanian, Take Me 2 The World at 14:15